Mad Cool Festival announces Its line-up for this next edition, which will take place from July 6 to 8, 2023 as always, in MADRID. 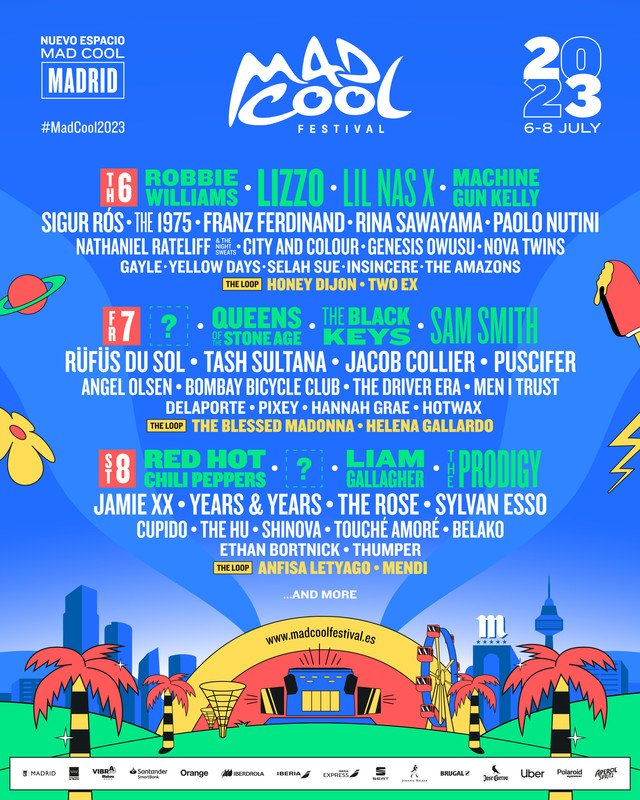 The Californians Red Hot Chili Peppers are one of the first confirmed headliners, unclassifiable and unique, they continue to cross musical barriers. We will be able to celebrate the band's 40th anniversary at this sixth edition of Mad Cool Festival.

Dan Auerbach and Patrick Carney, and their project The Black Keys, will be another of the leading bands of this edition, sharp riffs and hymns that blend rock and blues perfectly, a once in a life time worth watching band.

Another of the surprises of the line-up comes from Robbie Williams, making one of the stops of his "XXV" tour at Mad Cool Festival. The American Lizzo confirms what will be his first performance in Madrid, promising big doses of catchy rhythms and hits like "Juice" or "About Danm Time". Also joining the new line-up are such relevant names in the current scene as Sam Smith, Machine Gun Kelly (in his first concert in Madrid), or Lil Nas X.

The nationals Delaporte will revolutionize the stage with their personal mix of electronic sounds and lots of dancing, while The Blessed Madonna and Honey Dijon will be in charge of making us enjoy and dance in the night sessions with their track mixing.

Rina Sawayama, or what is the same, the antithesis of traditional pop joins the line-up in which we will also find the iconic The 1975, will present their new album 'Being Funny in a Foreign Language' being another of the first confirmations for Mad Cool 2023. Nova Twins will bring us a rock made in UK of the most revolutionary, pure fire on stage and large doses of rebellion. Another of the great confirmations is Queens of the Stone Age, the American band will land on one of our stages with their stoner rock sound as lead band. Also joining this first announcement are the Irish post-rock band Sigur Rós. Liam Gallagher and The Prodigy will bring us the best hits made in UK.

One more year, Mad Cool becomes a musical and cultural reference for both Madrid and Spain, attracting national and international audiences, being one of the most recognized festivals of the moment thanks to its commitment and mix between different proposals.